Irving Berlin's classic Bing Crosby musical will be getting a special Anniversary Edition this October. Pre-orders are now up.

In an early announcement to retailers, Paramount is preparing 'White Christmas: Diamond Anniversary Edition' for Blu-ray on October 14.

In honor of the 60th anniversaries of White Christmas and Danny Kaye's appointment as UNICEF's first Goodwill Ambassador, The Danny Kaye and Sylvia Fine Kaye Foundation and Paramount Pictures are proud to make a combined $100,000 donation to the U.S. Fund for UNICEF to support UNICEF's lifesaving work for children around the world. As UNICEF's Goodwill Ambassador, Danny Kaye traveled to numerous countries in 1954 to see the work of the organization firsthand and appeared in and narrated a documentary entitled Assignment Children about his experience, which is included in the new Blu-ray Combo Pack along with a new introduction by Michael Bublé. Danny Kaye received an Honorary Academy Award in 1955 for his work on this extraordinary documentary, as well as for his unique talents, his service to the Academy, the motion picture industry, and the American people.

The Blu-ray/DVD/CD combo pack will feature 1080p video, lossless 5.1 and mono audio, and supplements include: Feature film with optional Sing-Along Subtitle Track—NEW!; Commentary by Rosemary Clooney; Classic Holiday Moments—NEW!; Assignment Children—NEW! - With introduction by Michael Bublé; Backstage Stories from White Christmas—The production boasted the #1 and #3 box office stars of its time and the director of Casablanca. It featured the most popular song in American history and became the highest-ranking film at the box office in 1954. From little-known production details to behind-the-scenes trivia, this segment offers insights about the timeless holiday classic; Bing Crosby: Christmas Crooner—Crosby's family members offer personal memories of the film and discuss the crooner's Yuletide connection. The piece also includes film historians sharing rare stories about Crosby and White Christmas and a visit to Crosby's hometown of Spokane, Washington; Danny Kaye: Joy to the World—Some people only know him as the silver screen's 'court jester,' but Danny Kaye was a true humanitarian who helped children around the world as a UNICEF Goodwill Ambassador. This moving tribute sheds light on the multi-talented actor, who won two honorary Academy Awards®, including the Jean Hersholt Humanitarian Award, and spread joy beyond the Hollywood spotlight; Irving Berlin's White Christmas—Many people don't know all of the lyrics to the most popular Christmas song of all time or that Irving Berlin wrote it while sitting poolside at an Arizona Resort. This fascinating feature sheds light on the genesis and enduring popularity of the best-selling single in American history; Rosemary's Old Kentucky Home—Take a tour of Rosemary Clooney's home in Augusta, Kentucky, which has become a historical landmark; White Christmas: From Page to Stage— The legacy of White Christmas continues with a hit Broadway musical, nominated for two Tony awards; White Christmas: A Look Back with Rosemary Clooney; White Christmas Photo Galleries—NEW!; and Two Theatrical Trailers.

You can find the latest specs for 'White Christmas: Diamond Anniversary Edition' linked from our Blu-ray Release Schedule, where it's indexed under November 4. 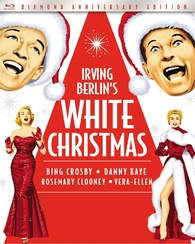