'Under the Dome: Season 3' Announced for Blu-ray

The third season of the series based on Stephen King's novel is planned for Blu-ray in December.

In an early announcement to retailers, Paramount is preparing 'Under the Dome: Season 3' for Blu-ray on December 8.

In Season 3 of Under the Dome, the line between friend and foe continues to blur. After a life-changing experience in the tunnels beneath the town, the people of Chester's Mill are trying to move on. But the arrival of a new resident and an opportunistic corporation prove that's not going to be easy. As the Dome's purpose begins to unravel, it becomes clear that some won't make it out alive. Th press delete.

The Blu-ray will feature 1080p video, lossless 5.1 audio, and supplements include: Extended and Deleted Scenes; Return To The Dome: A Look At Season 3; Life Under The Dome: Behind-The-Scenes of Season 3; The Season Finale; The Device; Meet Indy The Dog; and Gag Reel.

You can find the latest specs for 'Under the Dome: Season 3' linked from our Blu-ray Release Schedule, where it is indexed under December 8. 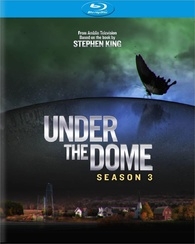