The televised drama starring Avan Jogia as Tutankhamun and Ben Kingsley as his trusted adviser is planned for Blu-ray next month.

In an early announcement to retailers, Paramount will be releasing 'Tut' on Blu-ray on October 6.

Tut is a larger-than-life, action-packed TV event that tells the astounding saga of one of history's most extraordinary rulers, Tutankhamun, his rise to power, and his struggle to lead Egypt to glory. The historical drama also stars Sibylla Deen, Alexander Siddig, Kylie Bunbury, Peter Gadiot, Iddo Goldberg and Nonso Anozie.

The two-disc set will feature 1080p video, a Dolby TrueHD 5.1 soundtrack, and supplements include: The Costumes of Tut, History Revealed, and Unmasking the Legend: The Making of Tut.

You can find the latest specs for 'Tut' linked from our Blu-ray Release Schedule, where it is indexed under October 6. 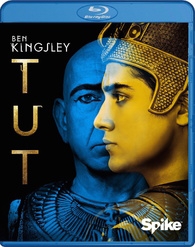