The third season of the sequel series to 'Avatar: The Last Airbender' will hit Blu-ray in December. You can pre-order the show here.

In an early announcement to retailers, Paramount is preparing 'The Legend of Korra - Book Three: Change' for Blu-ray on December 2.

Set in a fictional world where some people can "bend" by manipulating the elements of water, earth, fire, or air, only one person, the "Avatar", can manipulate all four elements, thus becoming responsible for maintaining the balance in the world. The series follows Korra, the current incarnation of the Avatar as she travels to the metropolis of Republic City to learn airbending and face an anti-bender revolutionary group, the "Equalists".

The Blu-ray will feature 1080i video, a DTS-HD MA 5.1 soundtrack, and supplements will include: Audio Commentaries by Creators and Crew and Behind-The-Scenes Featurettes with Animatics.

You can find the latest specs for 'The Legend of Korra - Book Three: Change' linked from our Blu-ray Release Schedule, where it's indexed under December 2. 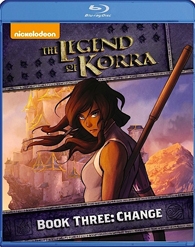 Discs mentioned in this article: (Click for specs and reviews)
The Legend of Korra - Book Three: Change (Blu-ray)