The comedy drama starring Meryl Streep and Hugh Grant is planned for Blu-ray in December.

In an early announcement to retailers, Paramount is working on 'Florence Foster Jenkins' for Blu-ray on December 13.

Based on the incredible true story, Academy Award winner Meryl Streep stars as a New York socialite who dreams of becoming a great opera singer. While the voice she hears in her head is beautiful, to everyone else it is hilariously awful. Her husband and biggest fan, St. Clair Bayfield (Hugh Grant) is determined to protect his beloved Florence from the truth. But when Florence stages a huge concert at Carnegie Hall, he faces his greatest challenge to make sure her performance hits all the right notes. Directed by Stephen Frears (The Queen, Philomena), FLORENCE FOSTER JENKINS also stars Simon Helberg ("The Big Bang Theory") and Rebecca Ferguson (Mission: Impossible—Rogue Nation).

Specs have yet to be revealed, but supplements include: Deleted Scenes; "Ours is a Happy World"; The Music and Songs of Florence; Designing the Look; From Script to Screen; Florence Foster Jenkins World Premiere; Q&A with Meryl Streep; and Live at Carnegie Hall.

You can find the latest specs for 'Florence Foster Jenkins' linked from our Blu-ray Release Schedule, where it is indexed under December 13. 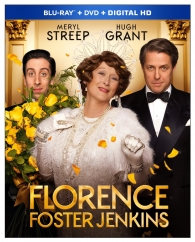