The third season of the Showtime crime drama is set for Blu-ray in December. You can pre-order now.

In an early announcement to retailers, Paramount is preparing 'Ray Donovan: Season Three' for Blu-ray on December 29.

The third season of the hugely popular series garnered more than 1.61 million viewers in its premiere episode, beating the Season 2 premiere by 32%, and adds notable guest stars to its cast including Katie Holmes (“Dawson’s Creek”), Ian McShane (“Deadwood”) and Wendell Pierce (“The Wire”).

Schreiber portrays the titular character Ray Donovan, a Boston-native who makes the problems of Tinseltown’s celebrities, superstar athletes, and business moguls disappear. In the latest season, Ray discovers that even his own actions have consequences and that clean slates are a dirty business. Ray takes some hits that would leave lesser men down for the count, but what doesn’t kill a Donovan only makes him stronger. One thing is for sure, whether you’re with him or against him – it may be a new day, but it’s the same Ray.

Specs and supplements have yet to be revealed, but suggested list price for the Blu-ray is $49.99.

You can find the latest specs for 'Ray Donovan: Season Three' linked from our Blu-ray Release Schedule, where it's indexed under December 29. 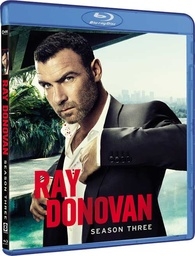