'Scouts Guide to the Zombie Apocalypse' Dated for Blu-ray

The R-rated horror comedy is bound for Blu-ray in January.

In an early announcement to retailers, Paramount will be releasing 'Scouts Guide to the Zombie Apocalypse' on Blu-ray on January 5.

Three scouts and lifelong friends join forces with one badass cocktail waitress to become the world's most unlikely team of heroes. When their peaceful town is ravaged by a zombie invasion, they'll fight for the badge of a lifetime and put their scouting skills to the test to save mankind from the undead.

You can find the latest specs for 'Scouts Guide to the Zombie Apocalypse' linked from our Blu-ray Release Schedule, where it is indexed under January 5. 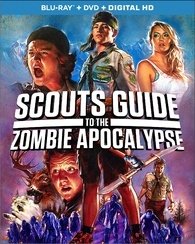