'Scorpion: Season One' Blu-ray Up for Pre-Order

The first season of the CBS series is now available for pre-order.

In an early announcement to retailers, Paramount is preparing 'Scorpion: Season One' for Blu-ray on September 1.

Scorpion is based on the true story of Walter O'Brien, an eccentric genius with the world's fourth-highest I.Q. and the creator of a company of brilliant misfits who use their mental muscle to defend the planet against complex high-tech threats of the modern age. In this high-octane thrill ride from the makers of 'Star Trek,' 'Transformers,' 'The Amazing Spider-Man 2' and 'The Fast and The Furious,' O'Brien's team uses their exceptional brainpower to solve the nation's crises, while also helping each other learn how to fit in.

You can find the latest specs for 'Scorpion: Season One' linked from our Blu-ray Release Schedule, where it's indexed under September 1. 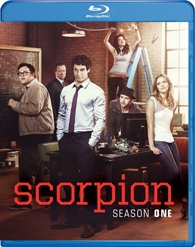 Discs mentioned in this article: (Click for specs and reviews)
Scorpion: Season One (Blu-ray)