Rupert Wyatt's 'The Gambler' Dated and Detailed for Blu-ray

The thriller starring Mark Wahlberg, John Goodman, and Jessica Lange will bet on Blu-ray in April.

In an early announcement to retailers, Paramount will be releasing 'The Gambler' on Blu-ray on April 28.

Wahlberg stars as Jim Bennett, a brilliant professor leading a secret double life as a high-stakes gambler. When Jim is forced to borrow money from a notorious gangster, he places the lives of those he loves in mortal danger. With time running out, he must enter the criminal underworld and risk everything to keep from losing it all. Written for the screen by Academy Award-winner William Monahan (The Departed).

The Blu-ray Combo Pack will feature 1080p video, a lossless 5.1 soundtrack, and supplements include: Mr. Self Destruct: Inside The Gambler; Dark Before Dawn: The Descent of The Gambler; Changing The Game: Adaptation; In The City: Locations; Dressing The Players: Costume Design; and Deleted/Extended Scenes. Also, for a limited time, the Blu-ray Combo Pack available for purchase will include an offer for $15 off sports tickets at Ticketmaster.com (U.S. only).

You can find the latest specs for 'The Gambler' linked from our Blu-ray Release Schedule, where it is indexed under April 28. 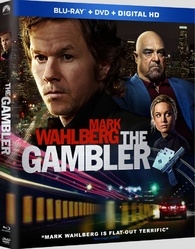