The time travel thriller arrives on Blu-ray in June.

In an early announcement to retailers, Paramount will be releasing 'Project Almanac' on Blu-ray on June 9.

Project Almanac follows a brilliant high school student (Jonny Weston) and his friends who discover blueprints for a machine that can send them back in time. They soon rewrite history to win the lottery, ace exams, and party like there's no tomorrow. But by changing the past, they have threatened the future of our world. Can they undo the damage they have unleashed before it's too late?

The Blu-ray/DVD/Digital Copy combo pack will feature 1080p video, a lossless 5.1 soundtrack, and supplements include deleted scenes and alternate opening/endings.

You can find the latest specs for 'Project Almanac' linked from our Blu-ray Release Schedule, where it is indexed under June 9. 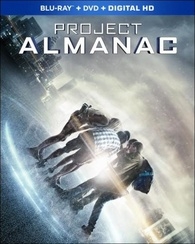