In an early announcement to retailers, Paramount is set to release 'Interstellar' on Blu-ray on March 31.

In Earth's future, a global crop blight and second Dust Bowl are slowly rendering the planet uninhabitable. Professor Brand (Michael Caine), a brilliant NASA physicist, is working on plans to save mankind by transporting Earth's population to a new home via a wormhole. But first, Brand must send former NASA pilot Cooper (Matthew McConaughey) and a team of researchers through the wormhole and across the galaxy to find out which of three planets could be mankind's new home.

You can find the latest specs for 'Interstellar' linked from our Blu-ray Release Schedule, where it is indexed under March 31. 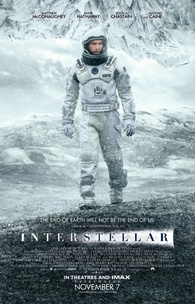