The third and final season of the horror series arriving on Blu-ray in October has now been fully detailed.

As previously reported, Paramount and Showtime will be releasing 'Penny Dreadful: The Final Season' on Blu-ray on October 4.

What if the only way to battle our demons is to surrender to them? Welcome to the darkest and most thrilling season of PENNY DREADFUL yet. Confronting new horrors in dangerous new lands, Ethan Chandler (Hartnett), Dr. Frankenstein (Treadaway), Dorian Gray (Carney), Sir Malcolm (Dalton), the Creature (Kinnear) and the ravishing but deadly Lily (Piper) must each face – and embrace – their own most truly monstrous selves. But for the beautiful and tortured Vanessa Ives (Green), accepting her demons could exact a terrible cost and plunge the world into unending darkness.

You can find the latest specs for 'Penny Dreadful: The Final Season' linked from our Blu-ray Release Schedule, where it's indexed under October 4. 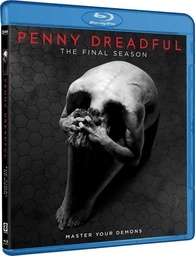