The first season of the Showtime thriller series hitting Blu-ray in October has been detailed. You can pre-order it here!

As previously reported, Paramount says 'Penny Dreadful: Season One' will have a Blu-ray release on October 7.

From three-time Oscar® nominee John Logan (Skyfall, Hugo, Gladiator) and Oscar winner Sam Mendes (American Beauty, Skyfall), PENNY DREADFUL is a frightening psychosexual drama that weaves together classic horror origin stories into a gripping series that is “moody, mystical and wonderfully twisted” (Cleveland Plain Dealer). PENNY DREADFUL, starring Josh Hartnett (Black Hawk Down), Timothy Dalton (The Living Daylights) and Eva Green (Casino), completely reinvents literature’s most famous characters. Icons of terror such as Victor Frankenstein, Dorian Gray and timeless figures from Dracula join a core of original characters in a dark and brutal quest to save a soul – even as they grapple with their own monstrous temptations.

The 3-disc set will feature 1080p video, a lossless 5.1 soundtrack, and supplements include: Ray Donovan: Season One, Episodes 1 & 2; What is a Penny Dreadful?; Literary Roots; Coming Together; The Artisans Pt. 1 & 2; The Grand Guignol; Prostitution and Sex in Victorian Times; British Exploration & The Search for the Nile; The Science of Medicine.

You can find the latest specs for 'Penny Dreadful: Season One' linked from our Blu-ray Release Schedule, where it is indexed under October 7. 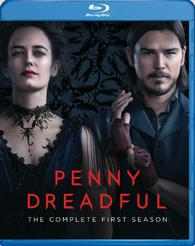