Two 'Peanuts' classics will be available in stores this month.

Paramount is set to release 'Peanuts: Snoopy, Come Home' and 'Peanuts: A Boy Named Charlie Brown' on Blu-ray on September 6.

'Peanuts: Snoopy, Come Home' - When America's most beloved beagle suddenly goes missing, the whole Peanuts gang bands together to bring him back home. With "Dogs Not Allowed" signs everywhere he turns, Snoopy and his newfound feathered friend Woodstock (making his big screen debut) leave the comforts of home behind and head for the highways in search of their true place in the world. Camping out, eating up and just living the life of the open road, the intrepid twosome make their way across the country, dodging possessive pet-collectors, less-than-hospitable hospital workers, and bullying bus drivers on their way to reveal Snoopy's secret past—only to discover that there really is no place like home in this heartwarming story featuring Charlie Brown, Lucy, Linus and the whole gallery of your Peanuts favorites

You can find the latest specs for 'Peanuts: Snoopy, Come Home' and 'Peanuts: A Boy Named Charlie Brown' linked from our Blu-ray Release Schedule, where they are indexed under September 6. 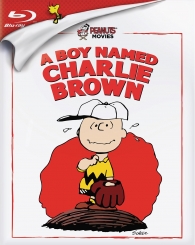