The acton comedy is racing toward Blu-ray in April.

In an early announcement to retailers, Paramount is preparing 'Monster Trucks' for Blu-ray on April 11.

Looking for any way to get away from the life and town he was born into, Tripp (Lucas Till), a high school senior, builds a Monster Truck from bits and pieces of scrapped cars. After an accident at a nearby oil-drilling site displaces a strange and subterranean creature with a taste and a talent for speed, Tripp may have just found the key to getting out of town and a most unlikely friend.

The Blu-ray will feature 1080p video, a Dolby Atmos soundtrack, and supplements will include:

You can find the latest specs for 'Monster Trucks' linked from our Blu-ray Release Schedule where it's indexed under April 11. 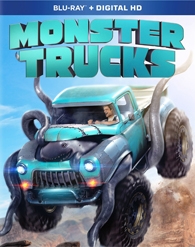 Discs mentioned in this article: (Click for specs and reviews)
Monster Trucks (Blu-ray)