Josh Gordon & Will Speck's holiday comedy is coming to Blu-ray.

In an early announcement to retailers, Paramount is preparing 'Office Christmas Party' for Blu-ray in 2017.

In Office Christmas Party, when the CEO (Jennifer Aniston) tries to close her hard-partying brother's branch, he (T.J. Miller) and his Chief Technical Officer (Jason Bateman) must rally their co-workers and host an epic office Christmas party in an effort to impress a potential client and close a sale that will save their jobs. The latest comedy from directors Josh Gordon and Will Speck (BLADES OF GLORY) co-stars Kate McKinnon, Olivia Munn, Jillian Bell, Rob Corddry, Vanessa Bayer, Randall Park, Sam Richardson, Jamie Chung, and Courtney B. Vance in the funniest movie of the holiday season.

You can find the latest specs for 'Office Christmas Party' linked from our Blu-ray Release Schedule, where it's indexed under PENDING. 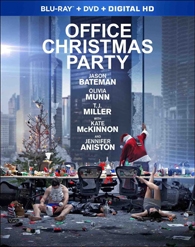