The classic Oscar-winning film has been restored for a Blu-ray release at the end of the month.

In an early announcement to retailers, Paramount will be bringing 'My Fair Lady: 50th Anniversary Edition' to Blu-ray on October 27.

The release will feature a brand new 4k restoration from an 8K scan of the original negative and other surviving 65mm elements, all painstakingly restored by acclaimed film historian and preservationist Robert A. Harris.

Adapted from the original Broadway hit and headlined by Hollywood legends Audrey Hepburn and Rex Harrison, My Fair Lady 50th Anniversary Edition arrives in collectible packaging with an entire Blu-ray disc dedicated to 90 minutes of special features including a variety of original trailers and featurettes that were used in theaters to promote the feature film, as well as footage from the film's Los Angeles and British premieres in 1964.

You can find the latest specs for 'My Fair Lady: 50th Anniversary Edition' linked from our Blu-ray Release Schedule, where it is indexed under October 27. 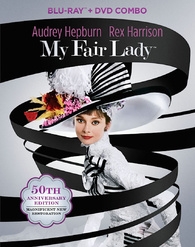