The action-packed film based on a true story heads to Blu-ray in June.

In an early announcement to retailers, Paramount will be releasing '13 Hours: The Secret Soldiers of Benghazi' on Blu-ray on June 7.

'13 Hours: The Secret Soldiers of Benghazi' tells the incredible true story of six elite ex-military operators who fought to protect the CIA against overwhelming odds when terrorists attacked a U.S. diplomatic compound on September 11, 2012. The film is based on the nonfiction novel "13 Hours: The Inside Account of What Really Happened in Benghazi" by New York Times best-selling author Mitchell Zuckoff with the members of the Annex Security Team.

The Blu-ray will feature 1080p video, a Dolby Atmos soundtrack, and supplements include: For the Record: Finding the Truth Amid the Noise; Uncovering Benghazi's Secret Soldiers; and Preparing for Battle: Behind the Scenes of 13 Hours.

You can find the latest specs for '13 Hours: The Secret Soldiers of Benghazi' linked from our Blu-ray Release Schedule, where it is indexed under June 7. 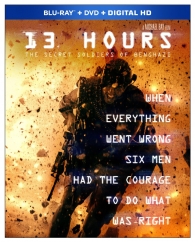