In an early announcement to retailers, Paramount is working on 'Office Christmas Party' for Blu-ray on April 4.

When an overbearing CEO (Jennifer Aniston) decides to close her hard-partying brother's failing branch, he (T.J. Miller) and his fired up co-workers (Jason Bateman, Olivia Munn, Kate McKinnon) decide to throw an epic office party to land a big shot client and save everyone's jobs. Fueled by booze and bad decisions, things quickly spiral out-of-control in one of the craziest nights of their lives.

The combo pack will feature both the theatrical and unrated cuts of the film in 1080p with lossless 7.1 audio, and supplements include: Audio Commentary by directors Josh Gordon & Will Speck; Throwing an Office Christmas Party; Outtakes; and Deleted & Extended Scenes.

You can find the latest specs for 'Office Christmas Party' linked from our Blu-ray Release Schedule, where it is indexed under April 4. 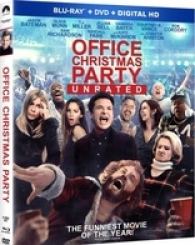