The classic film starring John Travolta will be returning to Blu-ray in May.

In an early announcement to retailers, Paramount says 'Saturday Night Fever: 40th Anniversary Edition' will hit Blu-ray on May 2.

From John Travolta's electrifying Oscar-nominated performance to the Bee Gees' top 10 soundtrack to the unforgettable dancing, Saturday Night Fever is a movie sensation that captured the world's attention like never before. Now catch the fever all over again with this 30th Anniversary Special Collector's Edition that goes behind-the-scenes with special features on the history, culture and fashion of disco, the smash-hit soundtrack, an exclusive look at Hollywood legend John Travolta, and so much more. Now more than ever before, Saturday Night Fever is the one film that'll make you feel like dancing.

Director John Badham worked with Paramount in 2016 to restore the film in 4K using the original negative and update the surround sound mix to further enhance viewers' enjoyment of the incredible soundtrack. During this process he added scenes to the theatrical R-rated version that round out character and plot, making this new Director's Cut the definitive representation of his original vision.

You can find the latest specs for 'Saturday Night Fever: 40th Anniversary Edition' linked from our Blu-ray Release Schedule, where it's indexed under May 2. 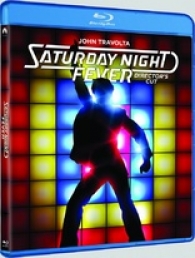