The new chapter in the beloved 'Ring' horror franchise is coming to Blu-ray in early May.

As previously reported, Paramount is preparing 'Rings' for Blu-ray later this year, and now the date has been set for May 2.

A young woman becomes worried about her boyfriend when he explores a dark subculture surrounding a mysterious videotape said to kill the watcher seven days after he has viewed it. She sacrifices herself to save her boyfriend and in doing so makes a horrifying discovery: there is a "movie within the movie" that no one has ever seen before…

Specs have yet to be revealed, but supplements include: Terror Comes Full Circle - Featurette; Resurrecting the Dead: Bringing Samara Back - Featurette; Scary Scenes; and Deleted/Extended/Alternate Scenes.

You can find the latest specs for 'Rings' linked from our Blu-ray Release Schedule, where it's indexed under May 2. 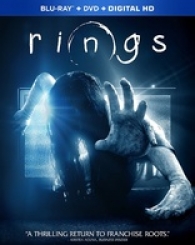