The latest installment in the horror franchise is coming to Blu-ray.

In an early announcement to retailers, Paramount is preparing 'Rings' for Blu-ray later this year.

Julia becomes worried about her boyfriend, Holt, when he explores the dark urban legend of a mysterious video said to kill the watcher seven days after viewing. She sacrifices herself to save her boyfriend and in doing so makes a horrifying discovery: there is a "movie within the movie" that no one has ever seen before.

You can find the latest specs for 'Rings' linked from our Blu-ray Release Schedule, where it's indexed under PENDING. 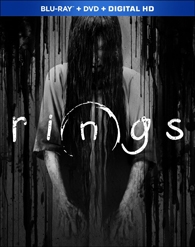 Discs mentioned in this article: (Click for specs and reviews)
Rings (Blu-ray)