The first season of the sci-fi drama starring Halle Berry is rocketing toward Blu-ray in December. You can pre-order the show here.

In an early announcement to retailers, Paramount is preparing 'Extant: Season 1' for Blu-ray on December 9.

Academy Award-winning producer Steven Spielberg launches a sci-fi thriller that explores the realms of family, evolution and, ultimately, the survival of the human race. Academy Award winner Halle Berry plays Molly Woods, an astronaut trying to readjust to life on earth after a 13-month space mission. But slipping back into her role as wife and mother gets complicated when her doctor (Golden Globe winner Camryn Manheim) discovers that after a year-long solo mission, Molly is inexplicably pregnant. Adding to her stress, Molly struggles to reconnect with her "son," a humanoid robot created by her engineer husband (Goran Visnijic), both as a response to their infertility and as a scientific pet project. From the creation of life to the mysteries of space to the future of humanity, the world will never be the same. And neither will Molly Woods.

Specs have not been detailed yet, but supplements will include: Extant: Filming Season One; The Story of Extant; Extant: The Pilot Episode - The Premiere; Extant: The Cast; 7 CBS Launch Promos; Interview: Games of Words with Mickey Fisher; The Offspring; The Future World of Extant; and The VFX of Extant.

You can find the latest specs for 'Extant: Season 1' linked from our Blu-ray Release Schedule, where it's indexed under December 9. 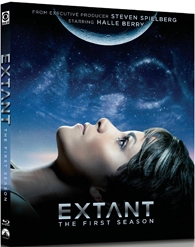 Discs mentioned in this article: (Click for specs and reviews)
Extant: Season 1 (Blu-ray)