The film based on the Pulitzer Prize-winning play will arrive on Blu-ray in March.

In an early announcement to retailers, Paramount is preparing 'Fences' for Blu-ray on March 14.

Denzel Washington directed and stars in this adaptation of August Wilson's Pulitzer Prize-winning play, which centers on a black garbage collector named Troy Maxson in 1950s Pittsburgh. Bitter that baseball's color barrier was only broken after his own heyday in the Negro Leagues, Maxson is prone to taking out his frustrations on his loved ones. Both Washington and co-star Viola Davis won Tonys for their performances in the 2010 revival of the play. Stephen Henderson, Jovan Adepo, Russell Hornsby, and Mykelti Williamson round out the supporting cast.

You can find the latest specs for 'Fences' linked from our Blu-ray Release Schedule, where it's indexed under March 14. 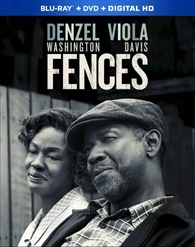 Discs mentioned in this article: (Click for specs and reviews)
Fences (Blu-ray)