The nineteenth season of the hit animated series is heading to Blu-ray in September.

In an early announcement to retailers, Paramount is preparing 'South Park: The Complete Nineteenth Season' for Blu-ray on September 6.

This stunning and brave 19th season of South Park follows a serialized model for the first time in the show’s history. The season is built around an extended satire of political correctness beginning when a new socially conscious principal comes to town. In other episodes, Mr. Garrison makes a bid for the White House, Randy takes the lead in gentrifying the town, and everyone is looking for their safe space.

The Blu-ray will feature 1080p video, a Dolby TrueHD 5.1 soundtrack, and supplements will include: Deleted Scenes; #Social Commentary; Mini Commentaries; and South Park: The Fractured But Whole - E3 2016 Game Trailer.

You can find the latest specs for 'South Park: The Complete Nineteenth Season' linked from our Blu-ray Release Schedule, where it's indexed under September 6. 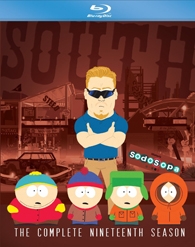