The eighteenth season of the hit animated series is now available for pre-order.

In an early announcement to retailers, Paramount is preparing 'South Park: The Complete Eighteenth Season' for Blu-ray in 2015.

Come on down to 'South Park' with all-new episodes from Season 18. Every episode of this critically-acclaimed and award-winning show is packed with unforgettable moments and hilarious absurdity — from pissed off celebrities to talking towels and crime-fighting kids. Join Kyle, Stan, Kenny and Cartman for all their foul-mouthed adventures!

Supplements have not been detailed yet, but the Blu-ray will feature 1080p video and a Dolby TrueHD 5.1 soundtrack.

You can find the latest specs for 'South Park: The Complete Eighteenth Season' linked from our Blu-ray Release Schedule, where it's indexed under PENDING. 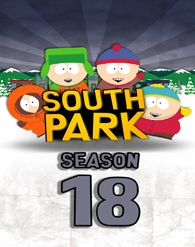