The star-studded comedy is planned for Blu-ray in March.

In an early announcement to retailers, Paramount is set to release 'Top Five' on Blu-ray on March 17.

Pulsing with the rhythm of his greatest stand-up, Chris Rock's Top Five takes things to the next level, reveling in the high and the low, and blending a star-studded comedic romp with an irresistible romance.

Top Five digs under the surface of show business, politics, rap, and the exigencies of being black and famous today—holding it all up to the light in the way only Chris Rock can. Mingling echoes of Woody Allen and Dick Gregory with the energy of Kanye West and Jay Z, TOP FIVE is an original and radically new kind of American movie.

Specs have yet to be revealed, but supplements will include: Feature Audio Commentary By Actor/Director Chris Rock; Never Just A Movie: Chris Rock and Top Five; The Making of Top Five; Andre Allen Standup Outtakes; Top Five moments you didn't see in theaters; and Deleted Scenes.

You can find the latest specs for 'Top Five' linked from our Blu-ray Release Schedule, where it is indexed under March 17. 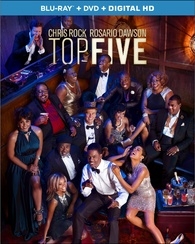