The stop-motion film from directors Duke Johnson and Charlie Kaufman will arrive on Blu-ray later this year.

In an early announcement to retailers, Paramount is preparing 'Anomalisa' for Blu-ray sometime in 2016.

From the Oscar-winner who brought you 'Eternal Sunshine of the Spotless Mind' and 'Being John Malkovich' comes a riveting new masterpiece. Michael Stone – husband, father and noted author – travels to Cincinnati to speak at a customer service conference. But once he’s separated from the routine of his daily life, a chance encounter helps him to realize just what, and whom, he’s been missing. Love, laughter and loneliness align in Charlie Kaufman’s "staggeringly inventive" (Chris Nashawaty, Entertainment Weekly) stop-motion work of art.

You can find the latest specs for 'Anomalisa' linked from our Blu-ray Release Schedule, where it's indexed under PENDING. 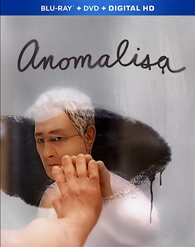 Discs mentioned in this article: (Click for specs and reviews)
Anomalisa (Blu-ray)