Blu-ray Hops Aboard 'The D Train' this Fall

The black comedy starring Jack Black and James Marsden is planned for Blu-ray in September.

In an early announcement to retailers, Paramount is set to release 'The D Train' on Blu-ray on September 1.

All his life, Dan Landsman (Jack Black) has never been the cool guy. He hopes to change everything by befriending former high school hero Oliver Lawless (James Marsden) and convincing him to show up at their class reunion. However, Dan's plan hilariously backfires as the unpredictable Oliver proceeds to take over his home, career and entire life.

The Blu-ray will feature 1080p video, lossless 5.1 audio, and supplements include a gag reel, deleted scenes, and a digital copy.

You can find the latest specs for 'The D Train' linked from our Blu-ray Release Schedule, where it is indexed under September 1. 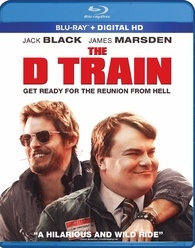