Paramount Home Entertainment has produced a new promotional flyer that previews several of its upcoming Blu-ray and HD DVD titles, including the first official confirmation of next-gen release for the hits 'Norbit' and 'Zodiac.'

As early adopters well know, Paramount regularly includes "Coming Soon" advertising inserts inside the keepcases of their Blu-ray and HD DVD releases. And while usually the discs included on these flyers are ones that have already been officially announced, when we recently received copies of the studio's upcoming next-gen releases of 'Failure to Launch' (due April 24) in our mailbox for review, we were pleasantly surprised to find this brand-new insert inside of each: (Below is the Blu-ray version, but the HD DVD is identical, simply swapping out brands and wrapper boxes.) 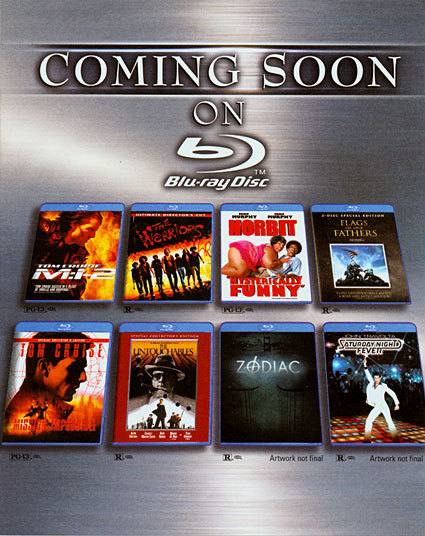 While most of the titles promoted in the ad are in stores now or have already been announced for future release -- including 'Flags of Our Fathers,' 'The Untouchables' and 'The Warriors' -- there are also three new ones that Paramount had not (until now) confirmed.

Coming to both Blu-ray and HD DVD will be the recent Eddie Murphy smash 'Norbit,' David Fincher's acclaimed 'Zodiac,' and the catalog classic 'Saturday Night Fever.'

Unfortunately, no street dates are given in the ad, only box art images. However, seeing as Paramount's past flyers have only promoted titles due a couple of months in the future at most, we expect announcements for all three titles shortly.

We'll certainly keep you posted on street dates and specs for these new Paramount gems as soon as they are officially announced. We've also added all three to the "Release Dates Pending" sections of our Blu-ray Release Schedule and HD DVD Release Schedule. Watch this space!