The classic film has been painstakingly remastered and will make its 4K Blu-ray debut in October.

Paramount says the newly remastered It's a Wonderful Life will be available on 4K Ultra HD Blu-ray and Blu-ray on October 29.

George Bailey is a small-town man whose life seems so desperate he contemplates suicide. He had always wanted to leave Bedford Falls to see the world, but circumstances and his own good heart have led him to stay. He sacrficed his education for his brother's, kept the family-run savings and loan afloat, protected the town from the avarice of the greedy banker Mr. Potter, and married his childhood sweetheart. As he prepares to jump from a bridge, his guardian angel intercedes, showing him what life would have become for the residents of Bedford Falls if he had never lived.

Paramount spent over a year painstakingly restoring this treasured film, using the original nitrate negative along with two fine grain masters made in the 1940s. Each element was carefully scanned using the very latest technology to both preserve the delicate negative and create the best possible digital image. Fortunately, 13 of the 14 reels of the original negative survived, but portions had begun to deteriorate so the best image was selected from one of the three original sources on a shot-by-shot basis. The result is a more vibrant and detail-rich picture that brings this classic to life like never before. 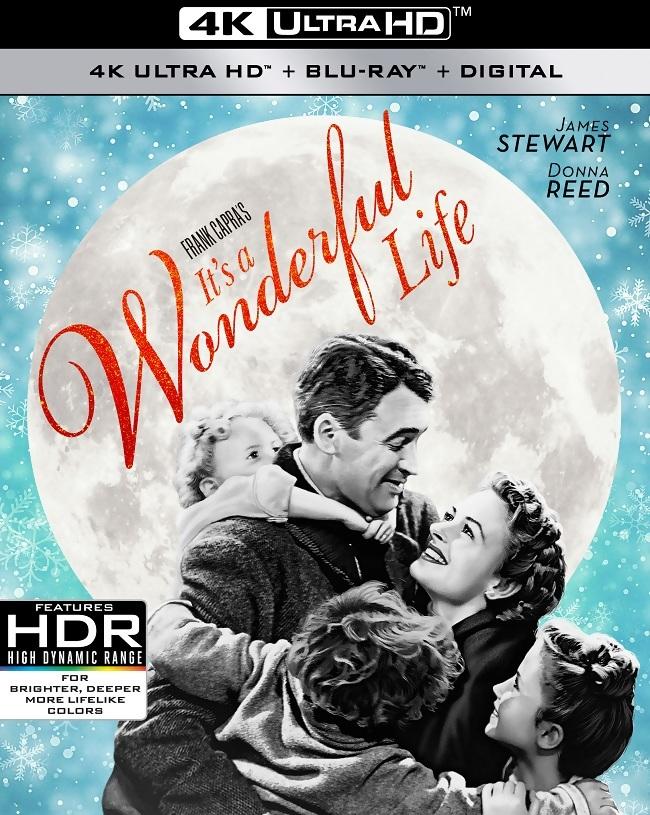 The 4K Ultra HD Combo Pack includes the black-and-white film in 4K high definition, as well as a colorized version on Blu-ray, along with three special features new to 4K Ultra HD disc: “Restoring a Beloved Classic,” “Secrets from the Vault,” and “It’s A Wonderful Wrap Party.” A 2-Disc Blu-ray set will also be available that includes the newly remastered film in black-and-white, along with a colorized version and the three special features listed above.

You can find the latest specs for It's a Wonderful Life linked from our 4K and Blu-ray Release Schedules, where it is indexed under October 29.