'The Tunnel: The Complete First Season' Blu-ray Dated for August

The mystery show is headed to Blu-ray in August.

In an early announcement to retailers, PBS is preparing 'The Tunnel: The Complete First Season' for Blu-ray on August 9.

When a dead body is discovered in the English Channel tunnel, exactly midway between England and France, a detective from each country is appointed to work the investigation. The two officers must must work on their own partnership as well as track down the criminal. Stephen Dillane and Clemence Poesy star. It is a fairly faithful re-make of Scandinavian hit The Bridge.

Specs have not been announced yet, but supplements will include: 20 minutes of behind-the-scenes footage; Cast interviews; And More.

You can find the latest specs for 'The Tunnel: The Complete First Season' linked from our Blu-ray Release Schedule, where it's indexed under August 9. 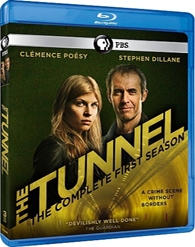 Discs mentioned in this article: (Click for specs and reviews)
The Tunnel: The Complete First Season (Blu-ray)