'The Durrells in Corfu: The Complete First Season' Blu-ray Announced

The PBS series is heading to Blu-ray in November.

In an early announcement to retailers, PBS is preparing 'The Durrells in Corfu: The Complete First Season' for Blu-ray on November 1.

Based on naturalist Gerald Durrell's much-loved trilogy of novels, The Durrells in Corfu sees impoverished but sparky widow Louisa Durrell (Keeley Hawes, MI-5) make the radical decision to leave 1930s England to seek out a new destiny for her family. As she relocates her reluctant brood to a dilapidated house in the Greek sun, the Durrells face a whole new set of challenges as they meet new friends, rivals, lovers and animals.

You can find the latest specs for 'The Durrells in Corfu: The Complete First Season' linked from our Blu-ray Release Schedule, where it's indexed under November 1. 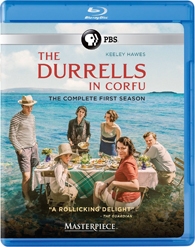 Discs mentioned in this article: (Click for specs and reviews)
The Durrells in Corfu: The Complete First Season (Blu-ray)