'The Almighty Johnsons: The Complete Series' Dated for Blu-ray

Every episode of the fantasy series from New Zealand will be available on Blu-ray later this month.

In an early announcement to retailers, PBS will be releasing 'The Almighty Johnsons: The Complete Series' on Blu-ray on April 28.

The Johnson brothers, Mike, Anders, Ty, and Axl, are far from ordinary-they are descendants of Norse gods. With the help of his brothers, Axl, as the human incarnation of Odin, must embark upon his life's quest: to find Frigg, his beloved, in order to rebuild the house of Asgard so that the Gods will rule again... unless their nemeses, the power-hungry Goddesses, can stop the Johnsons and find Frigg first.

The 11-disc set will feature 1080p video, a lossless 2.0 soundtrack, and supplements have yet to be revealed.

You can find the latest specs for 'The Almighty Johnsons: The Complete Series' linked from our Blu-ray Release Schedule, where it is indexed under April 28. 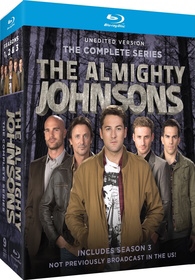