The jazz fueled miniseries is heading to Blu-ray in May. You can pre-order the show here.

In an early announcement to retailers, PBS is preparing 'Dancing on the Edge' for Blu-ray on May 5.

Set in an extraordinary period of immense change, the Louis Lester Band arrives at the forefront of an emerging musical movement: jazz. As the band grows in popularity and starts to mix with the upper classes, the intoxicating combination of music, money and parties pull the characters into a glamorous but perilous world. Soon the band begins to feel immune from the prejudice hovering beneath the surface of society, but the sudden death of one of the band members creates a catastrophic turn in their fortunes. They immediately find themselves confronted by betrayal, and their privileged position is quickly torn away from them as they begin to discover who their friends really are. A stellar cast including Chiwetel Ejiofor, John Goodman, Matthew Goode and Jacqueline Bisset star in this explosive drama, where for a moment music transcends the divisions of class and race, until fear and hate once again tear them apart.

You can find the latest specs for 'Dancing on the Edge' linked from our Blu-ray Release Schedule, where it's indexed under May 5. 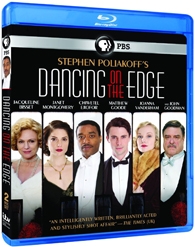 Discs mentioned in this article: (Click for specs and reviews)
Dancing on the Edge (Blu-ray)