The war medical drama is planned for Blu-ray in July.

In an early announcement to retailers, PBS is preparing to bring 'The Crimson Field' to Blu-ray on July 14.

In a tented field hospital on the coast of France, a team of doctors, nurses, and volunteers work together to heal the bodies and souls of men wounded in the trenches of WWI. The hospital is a frontier: between the battlefield and home front but also between the old rules, hierarchies, class distinctions, and a new way of thinking. Kitty (Oona Chaplin, Game of Thrones), Rosalie, and Flora arrive as the hospital’s first volunteer nurses and struggle to be accepted by the established medical team. The girls are flung headlong into a world for which nothing and nobody could have prepared them, but this is also an opportunity to break free of the constraints and limitations of their lives back home.

You can find the latest specs for 'The Crimson Field' linked from our Blu-ray Release Schedule, where it is indexed under July 14. 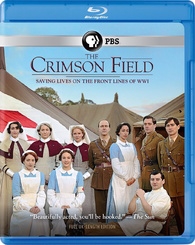