The show's second season will arrive on Blu-ray this month.

In an announcement to retailers, PBS is preparing 'Indian Summers: The Complete Second Season' for Blu-ray on September 27.

It is 1935. Three years have passed, and as the seasons turn, so too do the machinations of a rising revolution. As a new summer falls upon the foothills of India's Little England, Simla, political tensions reach fever point. With help from the scheming Cynthia (Julie Walters), Ralph faces the most pivotal year of his career. Alice s husband has followed her to India, and Aafrin s ascending career may be in jeopardy.

Supplements have not been detailed yet, but the Blu-ray will feature 1080p video and a DTS-HD MA 2.0 soundtrack.
Suggested list price for the Blu-ray is $59.99.
You can find the latest specs for 'Indian Summers: The Complete Second Season' linked from our Blu-ray Release Schedule, where it's indexed under September 27. 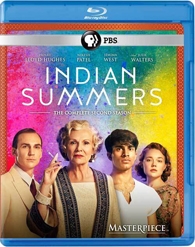