The first season of the British drama series will hit Blu-ray in July, and you can pre-order the show here.

In an early announcement to retailers, PBS is preparing 'Poldark' for Blu-ray on July 7.

Presumed dead by his friends and family, Captain Ross Poldark (Turner) returns home after fighting in the Revolutionary War to find the life he left behind in shambles. He quickly discovers his family estate in disrepair due to the unexpected death of his father. Facing the seemingly insurmountable task of managing his damaged land, he must also navigate a difficult relationship with his former fiancée, Elizabeth (Reed). Believing he had died in the war, she has recently agreed to marry another man, Poldark's cousin Francis (Soller). With the assistance of a kitchen maid named Demelza (Tomlinson), he sets out to rebuild his life and win Elizabeth back.

The Blu-ray will feature 1080p video, a DTS-HD MA 2.0 soundtrack, and supplements will include: Audio Commentary of Episode 1; The Man, The Icon
Behind the Scenes; The Women Behind the Man; Interviews with main cast, directors, writer and producer; and Footage from various scenes on set.

You can find the latest specs for 'Poldark' linked from our Blu-ray Release Schedule, where it's indexed under July 7. 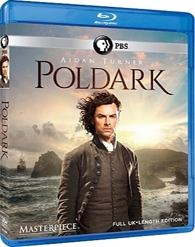 Discs mentioned in this article: (Click for specs and reviews)
Poldark (Blu-ray)