The British drama series is heading to Blu-ray in July, and you can pre-order the show here.

In an early announcement to retailers, PBS is preparing 'The Crimson Field' for Blu-ray on July 14.

Kitty Trevelyan tries to put the troubles of her past behind her as she joins two other girls, Flora Marshall and Rosalie Berwick, to volunteer at one of the busiest war hospitals in Northern France. For the hospital workers, it’s a daily battle to patch the men up and keep the war machine churning. Staff numbers are low and the volunteers are desperately needed, yet there are some who see these women as more of a threat than a lifeline. It’s not just the girls who are causing a stir. One particular patient is facing certain death but resisting it with all the strength he can muster. Alongside him lies the shell-shocked form of Lance Corporal Prentiss. He may be physically unmarked but this war has damaged him badly, and the staff is at a loss as to how to treat him. As the three volunteer nurses settle into their first day, it soon becomes clear that no training could ever have prepared them for the reality of working near the Front Line.

You can find the latest specs for 'The Crimson Field' linked from our Blu-ray Release Schedule, where it's indexed under July 14. 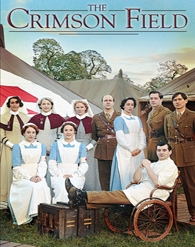 Discs mentioned in this article: (Click for specs and reviews)
The Crimson Field (Blu-ray)