PBS Announces 'Norman Lear: Just Another Version of You' for Blu-ray

Heidi Ewing and Rachel Grady's documentary will arrive on Blu-ray later this month.

In an early announcement to retailers, PBS is preparing 'Norman Lear: Just Another Version of You' for Blu-ray on October 25.

Specs have not been detailed yet, but supplements will include: What do a 92 year old Jew and the world of hip hop have in #Common?; Mary Hartman Breakdown; Mary Hartman Casting; Not Dead Yet; Bill Moyers on Norman Lear; and The Shrink and Syndication.

You can find the latest specs for 'Norman Lear: Just Another Version of You' linked from our Blu-ray Release Schedule, where it's indexed under October 25. 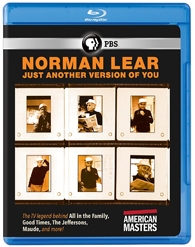 Discs mentioned in this article: (Click for specs and reviews)
Norman Lear: Just Another Version of You (Blu-ray)