The PBS drama will return to Blu-ray in May.

In an early announcement to retailers, PBS is preparing 'Masterpiece: Mr. Selfridge Season 4' for Blu-ray on May 17.

London, 1928. Nine years have passed and Harry Selfridge is at the pinnacle of his wealth and celebrity and enjoying the frenzy of the roaring 20s. But in this buzzing, fast-evolving world, Harry is splashing his cash in an unprecedented, dangerous way. As he parties and gambles with stage stars, the Dolly Sisters, and pursues risky new business ventures, the trials and tribulations of our other much loved characters, and a handful of newcomers, also unfold. Lady Mae returns to London to rebuild her life whilst Mardle and Grove thrash out their differences, and Kitty and Frank embark on the biggest challenge to their relationship yet. This final series chronicles Harry’s epic rollercoaster ride as he begins to lose grip on his empire, alongside the fortunes of all those whose lives he has touched.

You can find the latest specs for 'Masterpiece: Mr. Selfridge Season 4' linked from our Blu-ray Release Schedule, where it's indexed under May 17. 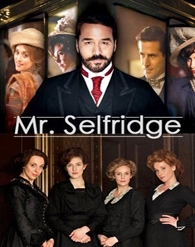