Ken Burns' 'The Civil War' Remastered and Bound for Blu-ray

The acclaimed documentary series has been remastered for Blu-ray this October.

In an early announcement to retailers, PBS will be releasing 'The Civil War: 25th Anniversary Commemorative Edition' on Blu-ray on October 13.

"THE CIVIL WAR” attracted an audience of 38.9 million during its premiere in September 1990. It set a record for the highest rated PBS series broadcast, which stands today. The New York Times said that Ken Burns “…takes his place as the most accomplished documentary filmmaker of his generation.” The Washington Post said, ‘This is not just good television, nor even just great television. This is heroic television.’ The columnist George Will added, ‘If better use has ever been made of television, I have not seen it and do not expect to see better until Ken Burns turns his prodigious talents to his next project.’ The series has been honored with more than 40 major film and television awards, including two Emmy Awards, two Grammy Awards, Producer of the Year Award from the Producers Guild, People’s Choice Award, Peabody Award, duPont-Columbia Award, D.W. Griffith Award and the Lincoln Prize, among dozens of others.

While Burns had directed and produced other award-winning films on PBS prior to “THE CIVIL WAR”, including his first feature film, the Academy Award-nominated THE BROOKLYN BRIDGE (1981), “THE CIVIL WAR” quickly became the standard for historic documentaries.

Over the course of two months, 50,000 feet of the original 16mm film negative, which is preserved at the George Eastman House, was scanned frame by frame at 4K (4096 x 2160 pixels, the resolution used for Ultra High Definition). The standard definition 1990 broadcast was taken from a duplicate of the original negative, resulting in a loss of quality. This is the first time the film will be seen with the exact same fidelity and framing as the negative that Burns and his co-cinematographers Allen Moore and Buddy Squires shot over 25 years ago.

The restoration of the program was done by Daniel J. White and supervised by Paul Barnes (lead editor of THE CIVIL WAR) of Ken Burns’s production company, Florentine Films, in association with the George Eastman House. Funding for the restoration was provided by Bank of America, PBS and The Corporation for Public Broadcasting.

The six-disc set will feature two hours of bonus features, including “The Making of The Civil War 25 years later”, uncut and re-mastered Shelby Foote interviews, and more.

You can find the latest specs for 'The Civil War: 25th Anniversary Commemorative Edition' linked from our Blu-ray Release Schedule, where it is indexed under October 13. 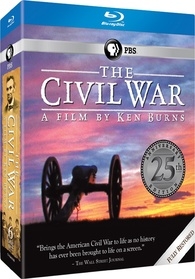