Ken Burns Presents 'Cancer: The Emperor Of All Maladies' for Blu-ray

The PBS documentary series is planned for Blu-ray in April.

In an early announcement to retailers, PBS will be releasing 'Cancer: The Emperor Of All Maladies' on Blu-ray on April 28.

“Cancer: The Emperor Of All Maladies” is a three-part, six-hour documentary series directed by award-winning filmmaker Barak Goodman and executive produced by Ken Burns. The project includes the documentary series, nearly two dozen webcast short films by Redglass Pictures, and a comprehensive national campaign with engagement partner Stand Up To Cancer (SU2C) and an array of other project supporters. A collaboration of Florentine Films, Laura Ziskin Pictures and WETA Washington, DC, in association with Ark Media, the series is based on the Pulitzer Prize-winning book “The Emperor of All Maladies: A Biography of Cancer” (Simon & Schuster 2010) by Siddhartha Mukherjee, M.D. At the urging of SU2C co-founder, the late Laura Ziskin, the Entertainment Industry Foundation obtained the television and film rights for its Stand Up To Cancer initiative shortly after the book was published.

The film project “CANCER: THE EMPEROR OF ALL MALADIES” began in 2010. Hollywood producer Laura Ziskin (“Pretty Women,” “Spider-Man”), a Stand Up To Cancer co-founder, had wanted to produce a documentary about cancer from the time she had been diagnosed with breast cancer in 2004. Having read an advanced review of the book, Ziskin quickly contacted Dr. Mukherjee, who awarded the rights to the Entertainment Industry Foundation on behalf of SU2C in December 2010. Simultaneously, WETA president and CEO Sharon Percy Rockefeller read the book during her treatment for cancer at The Johns Hopkins Kimmel Comprehensive Cancer Center in Baltimore. Shortly thereafter, Rockefeller connected with Burns, who lost his mother to cancer when he was 11. The two connected with Ziskin, and in early 2011 brought on filmmaker Goodman. (Ziskin, who lived with cancer for seven years, died in June 2011.)

Also part of the documentary project, WETA has launched CancerFilms.org, an expansive website with social and interactive media components created in conjunction with the documentary. The project website features an innovative short film series executive produced by Ken Burns and created by Redglass Pictures, featuring individual cancer patients and caregivers. Additional films will be released in the weeks leading up to the March 30 broadcast premiere.

You can find the latest specs for 'Cancer: The Emperor Of All Maladies' linked from our Blu-ray Release Schedule, where it is indexed under April 28. 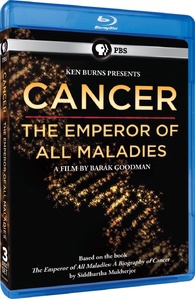