The next three installments in the PBS series will arrive on Blu-ray this November. You can pre-order the set now.

In an early announcement to retailers, PBS is preparing 'Inspector Lewis: Series 7' for Blu-ray on November 25.

Kevin Whately and Laurence Fox return for a seventh season of the beloved “Inspector Lewis” series. Hathaway has been promoted to Inspector after an extended break from the force, and Lewis is adjusting to retired life until he’s asked to team up with his old colleague. With their partnership renewed under altered circumstances, the duo continues to solve crimes in the seemingly perfect academic haven of Oxford, England.

Specs and supplements haven't been revealed yet, but suggested list price for the Blu-ray is $34.99.

You can find the latest specs for 'Inspector Lewis: Series 7' linked from our Blu-ray Release Schedule, where it is indexed under November 25. 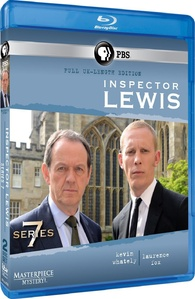