The detective series will tackle new cases on Blu-ray in August.

In an early announcement to retailers, PBS is preparing 'Inspector Lewis: Season 8' for Blu-ray on August 23.

Kevin Whately and Laurence Fox return for one last time as Inspector Lewis and Inspector Hathaway, investigating new cases of murder and other crimes in the seemingly perfect academic haven of Oxford. The arrival of new Chief Superintendent heralds a fresh dawn for Oxfordshire Police, although the high flyer soon clashes with Robbie Lewis over the latter's more traditional approach to detective work. With forensic pathologist Laura Hobson contemplating early retirement, and the new boss putting on the pressure, will Lewis finally decide to call time on his policing career?

You can find the latest specs for 'Inspector Lewis: Season 8' linked from our Blu-ray Release Schedule, where it's indexed under August 23. 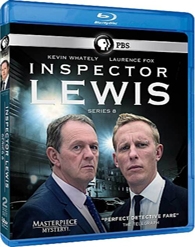