In an early announcement to retailers, PBS will be releasing 'Earth a New Wild' on Blu-ray on February 10.

With 45 shoots in 29 different countries using advanced filming techniques, the series provides all the spectacle of the best nature documentaries. It also goes a step further by capturing real-life encounters between wild animals and the people who live and work with them. These up-close looks at a range of species, from giant pandas to humpback whales, African lions and Arctic reindeer, uncover how people and wildlife – even top predators – can thrive alongside each other and be mutually beneficial.

Each of the five episodes – Home, Plains, Forests, Oceans and Water – visits a different critical habitat in which humans are engaging with nature in new ways. The stunning nature sequences in these “frontier” places reveal the new and surprising roles that wild nature plays in our lives and the critical part people can play in restoring the natural world.

“The pristine views of epic nature shows always leave something out of the picture: us,” said Sanjayan. “I traveled the world to film some of the wildest places. What I found were amazing stories that reveal a new paradigm about us and the planet we live on – that when we save wild nature we really are saving ourselves.”

You can find the latest specs for 'Earth a New Wild' linked from our Blu-ray Release Schedule, where it is indexed under February 10. 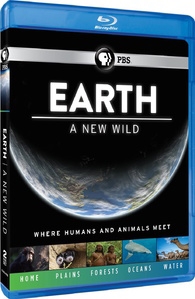