The 1994 film has been restored and will arrive on Blu-ray in April.

In an early announcement to retailers, Oscilloscope Pictures will be releasing 'River of Grass' on Blu-ray on April 26.

Kelly Reichardt s darkly funny debut feature, newly restored in 2K, brought the writer/director back to the setting of her adolescence, the suburban landscape of southern Florida. Shot on 16mm, the story follows the misadventures of disaffected house-wife and mom Cozy, played by Lisa Bowman, and the aimless layabout Lee, played by up-and-comer Larry Fessenden, whose drunken flirtation one fateful night sends their lives into a tailspin.

Described by Reichardt as a road movie without the road, a love story without the love, and a crime story without the crime, River of Grass introduced viewers to a breakout director defining her signature style. Reichardt went on to direct the award-winning and critically acclaimed films Old Joy (2006), Wendy and Lucy (2008), Meek's Cutoff (2010), and Night Moves (2013).

You can find the latest specs for 'River of Grass' linked from our Blu-ray Release Schedule, where it is indexed under April 26. 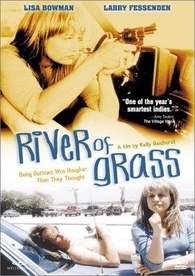