The Blu-ray will be available in stores next month.

In an early announcement to retailers, Olive Films will be releasing 'John Ford: Dreaming the Quiet Man' on Blu-ray on March 24.

In the emotional and entertaining documentary, John Ford: Dreaming The Quiet Man, director Sé Merry Doyle explores the tenacity of director John Ford and his twenty-year struggle to bring the classic film The Quiet Man to the screen.

The Quiet Man would go on to become a world wide box-office sensation, and win John Ford the Academy Award for Best Director and Winton C. Hoch and Archie Stout an Oscar for Best Cinematography.

Doyle's documentary features interviews with film notables including leading lady Maureen O Hara and directors Martin Scorsese, Peter Bogdanovich and Jim Sheridan, who share the indelible impact that the film has had their lives and influenced their careers. This revealing behind-the-scenes look at the making of Ford s classic is highlighted with rare and never-before-seen home movies documenting the cast and crew s time filming in Ireland.

Narrated by Gabriel Byrne, John Ford: Dreaming The Quiet Man provides viewers with a unique glimpse inside the making of a time-tested classic.

Specs haven't been revealed yet, but supplements will include: Bonus interview with Maureen O Hara, and Deleted Scenes.

You can find the latest specs for 'John Ford: Dreaming the Quiet Man' linked from our Blu-ray Release Schedule, where it is indexed under March 24. 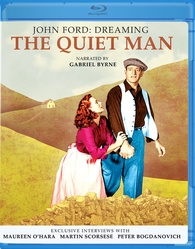