'Satan's Blade' Bound for Blu-ray in May

The 80s horror flick will terrorize Blu-ray in May. You can pre-order the movie here.

In an early announcement to retailers, OIive Films is preparing 'Satan's Blade' for Blu-ray on May 12.

At a remote ski resort, the haunting legend of the mountains becomes a shocking reality when seemingly innocent holiday revelers become victims of sadistic stabbings at the tip of 'Satan’s Blade.' Romance and murder are horrifyingly entangled in a film that honors the slasher film genre.

You can find the latest specs for 'Satan's Blade' linked from our Blu-ray Release Schedule, where it's indexed under May 12. 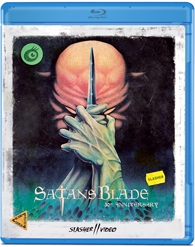 Discs mentioned in this article: (Click for specs and reviews)
Satan's Blade (Blu-ray)