Two new Olive Signature Blu-rays have been detailed for October.

In an early announcement to retailers, Olive Films is preparing 'The Quiet Man' & 'The Night of the Grizzly' for Blu-ray on October 25 under its Olive Signature Series.

'The Quiet Man' - Sean Thornton (John Wayne, Sands of Iwo Jima), an American boxer with a tragic past, returns to the Irish town of his youth. There, he purchases his childhood home and falls in love with the fiery local lass, Mary Kate Danaher (Maureen O Hara, Rio Grande). But Kate's insistence that Sean conduct his courtship in a proper Irish manner with matchmaker Michaleen Oge Flynn (Barry Fitzgerald, Going My Way) along for the ride as chaperone is but one obstacle to their future together; the other is her brother, Red Danaher (Victor McLaglen, Rio Grande), who spitefully refuses to give his consent to their marriage, or to honor the tradition of paying a dowry to the husband. Sean couldn't care less about dowries or any other tradition that might stand in the way of his happiness. But when Mary Kate accuses him of being a coward, Sean is finally ready to take matters into his own hands. The Quiet Man would go on to win two Academy Awards in 1953, including Best Director (John Ford) and Best Cinematography and received five more nominations including Best Picture, Best Screenplay and Best Supporting Actor (McLaglen)."

The Blu-ray will feature 1080p video, a DTS-HD MA mono soundtrack, and supplements will include: Audio commentary with John Ford biographer Joseph McBride Tribute to Maureen O'Hara with Ally Sheedy, Hayley Mills, and Juliet Mills; "Don't You Remember It, Seánín?: John Ford's The Quiet Man" - a visual essay by historian and John Ford expert Tag Gallagher; "Free Republic: The Story of Herbert J. Yates and Republic Pictures"; "The Old Man: Remembering John Ford" - an appreciation of the director with Peter Bogdanovich; and "The Making of The Quiet Man" – Written and hosted by Leonard Maltin. 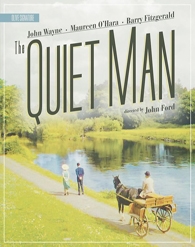 'The Night of the Grizzly' - Adventure is the name of the game in the action-packed, western-tinged The Night of the Grizzly. Clint Walker (The Dirty Dozen) stars as Big Jim"" Cole, a former lawman who trades his badge for rancher duds when he inherits land in Wyoming. But no sooner has the Cole family begun settling into their new life when nature in the form of a blood-thirsty grizzly bear rears its ugly head. Adding to the terror and tension are a group of envious neighbors who want the Cole property for themselves, and the unwelcome return of an outlaw from Big Jim s past who s out for revenge. Directed by Joseph Pevney (Man of a Thousand Faces), The Night of the Grizzly features a who's-who of great character actors including Keenan Wynn (Once Upon a Time in the West), Jack Elam (Hannie Caulder), Leo Gordon (Hondo) and Ron Ely (TV's Tarzan)."

The Blu-ray will feature 1080p video, a DTS-HD MA mono soundtrack, and supplements will include: Audio Commentary by film historian Toby Roan; "Blood on the Claw: How Cheyenne Bodie Became a Movie Star" - an essay by C. Courtney Joyner; "The Legend of Big Jim Cole" – interview with Clint Walker; The Night of the Grizzly World Premiere archival footage; and "At Home with Clint Walker and His Home Gymnasium" – archival interview. 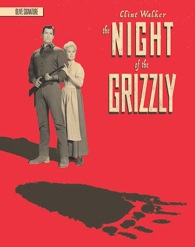 You can find the latest specs for 'The Quiet Man' & 'The Night of the Grizzly' linked from our Blu-ray Release Schedule, where they are indexed under October 25.